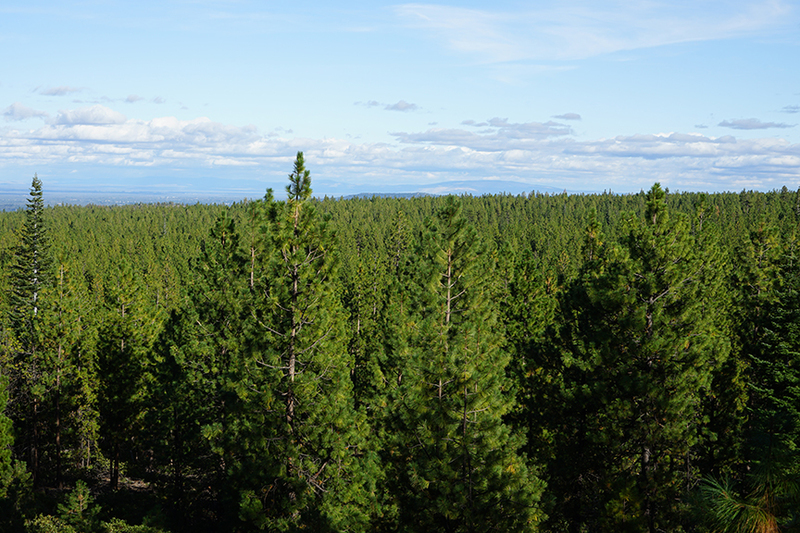 What has looked for months like an epic looming battle over Oregon’s forests has been called off under a new deal reached by environmental groups and logging industry players.

In an agreement announced Monday, conservation-minded groups have agreed to abandon a series of ballot measures aimed at stepped-up protections for forest waters, and at limiting aerial spraying of pesticides, among other things.

At the same time, timber industry players are planning to ditch their own ballot measures – filed in response to the environmental proposals – that would require landowners be compensated when state regulations curbed their ability to log, and alter the makeup of a state board that controls forest management policies.

The deal could result in the most significant changes to Oregon’s forest practices since the adoption of the Northwest Forest Plan in the 1990s.

“Healthy forests and a vibrant forestry industry are not mutually exclusive, and Oregonians need both for prosperous and sustainable communities,” Oregon Gov. Kate Brown said.

“The Cooperating Parties acknowledge that they have an incentive to reach a compromise on historically difficult issues without risking adverse outcomes in an election,” reads a memorandum of understanding signed by 26 groups – 13 on either side of the issue. The list includes environmental activists such as Oregon Wild, the Audubon Society of Portland, and the Oregon League of Conservation Voters, along with large timber outfits such as Stimson Lumber, Roseburg Forest Products and Weyerhaeuser.

Speaking on behalf of the forest industry coalition, Greg Miller, a former Weyerhaeuser spokesman, said the agreement would increase environmental benefits and provide certainty for the business community.

“This is the time, this is the historic moment where we can drive benefit for all Oregonians,” Miller said.

Another company signing the deal, Roseburg Forest Products, stood by its current practices and said the agreement was about setting aside differences.

“While we are confident in our current science-based forest practices, we recognize the need for a direct conversation about forest management,” spokeswoman Rebecca Taylor said. “The cooperative agreement announced today charts a path to provide greater assurances for a strong and vibrant industry and a healthy environment.”

Bob Van Dyk of the Wild Salmon Center, speaking on behalf of the environmental coalition, said the new agreement could bring Oregon up to date with environmental protections already adopted by its neighbors. Habitat conservation plans are already in place throughout forests, with the same ecology and many of the same landowners, throughout Washington state.

Oregon Wild Executive Director Sean Stevens, also a signer of the agreement, said that depends on the progress made over the next two years.

“This agreement is only a first step in a longer journey,” Stevens said. “Conservation of Oregon’s forests, and communities that live around them and rely upon them, is not guaranteed at the end of this process.”

Rather than engaging in an expensive and uncertain war to win over voters, both sides have agreed to participate in a mediated process of up to 18 months, according to the memo. The goal: to arrive at a federally approved “habitat conservation plan” for how private forests should be managed with an eye toward ensuring protection of vulnerable species and water resources.

In the meantime, timber industry players have agreed to support a bill in this year’s legislative session that would increase notification requirements for aerial pesticide spraying on private timber land, and increase buffers for such spraying around schools, homes and streams.

Aerial spraying has been a controversial practice for decades. It is a linchpin of industrial-scale forestry, as many timber owners consider spraying in the early years after a clear cut the most effective way to kill unwanted plants and regenerate a new crop of Douglas fir seedlings. It is also the subject of complaints from neighbors and environmental groups about potential drift or runoff into water. Multiple communities in Oregon’s coast range have claimed they were sickened by wayward pesticides meant to kill unwanted plants on private tree plantations.

The timber industry successfully fought additional no-spray buffers and requirements for notifying neighbors of aerial spraying during previous legislative sessions, but the industry also had indications those issues would be more vulnerable on the ballot than in the hands of lawmakers.

Voters in Lincoln County approved a ban on aerial spraying in 2016, which was later overturned in court. That was despite industry groups and other opponents of the ban outspending supporters $475,000 to $21,600.

Beyond that, the industry’s own polling also has shown that voters in coastal counties have widespread support for logging but are nonetheless “very susceptible to the idea of banning aerial pesticides,” according to a memo obtained by OPB and The Oregonian/Oregonlive through Oregon’s public records law.

The 2018 memo from the Oregon Forest & Industries Council, which represents large timber companies and many of the signatories to today’s agreement, outlined poll results from 500 likely voters in coastal Oregon.

The polling showed that, when given context about why companies use pesticides, between 55-57% of likely voters polled thought aerial spraying was “unnecessary” or “bad” and risked the spread of harmful chemicals through air and water. About a third of those polled considered the practice “necessary” or “good” for growing mature forests and supporting an important industry.

“Underlining the difficulty of this conversation,” the memo states, “voters who have immediate family employed in the timber industry or are employed themselves oppose aerial pesticides at the same rate as voters overall.”

The newly-announced deal also includes restrictions on stream-side logging in southern Oregon’s Siskiyou region, rules meant to protect fish. The region was exempted from those logging buffers, which are in place throughout the rest of the state’s coastal forests.

The mutual disarmament avoids what looked like a potentially bruising ballot fight later this year. And according to some players in the agreement, it creates a path by which Oregon could push forward protective policies long sought by environmental groups, while offering more certainty to property owners about how they can manage their land.

The agreement, brokered by the governor’s office, came together in four meetings held over the course of just two weeks, according to one participant.

While the deal calls for both sides to largely drop ballot proposals, it explicitly allows a legal fight over three of those proposals to continue.

The initiative petitions, filed with backing from the group Oregon Wild, all sought to step up protections against spraying and logging near forest waters and other sensitive areas. But all three were rejected by Secretary of State Bev Clarno, who found they were unconstitutionally overbroad.

Petitioners have challenged that opinion, and the case is currently before the Oregon Court of Appeals. The memorandum indicates the group intends to see the case “to final resolution.”