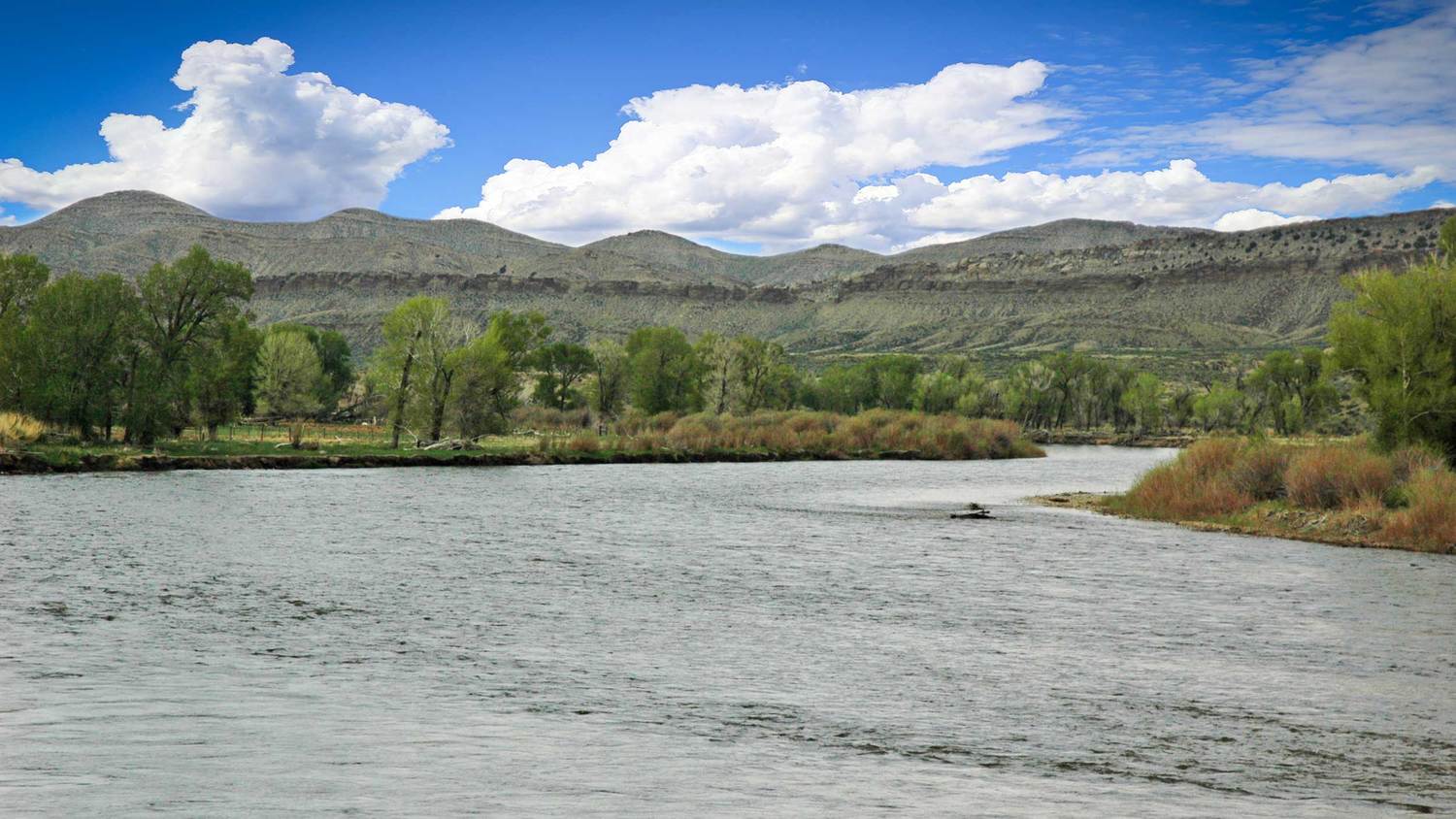 UNDER CONTRACT The North Platte River Ranch features 92,447+/- acres in one contiguous block of land situated in the Haystack Mountain Range and along the North Platte River. The ranch offers over five miles of North Platte River frontage, which is a source for irrigation and blue-ribbon fishing; an established cow/calf operation; opportunities to hunt deer, elk, and antelope. This diversified ranch consists of approximately 25,000 deeded acres, 40,960 acres of BLM, 2,960 acres State School lease, and 23,527 acres private lease. Improvements include an excellent calving/vet barn, feedlot, working corrals, two homes and several support buildings. While currently leased at a very attractive rate to a solid tenant, the North Platte River Ranch offers a low overhead ranch with a year-round grazing permit and solid improvements.

Located along the east slope of the Continental Divide and west of the North Platte River, the ranch  lies just north/east of Rawlins, Wyoming. The Ranch borders and lies north or Interstate 80 and borders and lies east of US Highway 287. Rawlins is the primary trade town in the area as well as the county seat for Carbon County. It has a charming atmosphere of small boutiques, first class restaurants, casual eateries, beautiful parks, schools, banks, and agricultural services. Area economics are related to ranching, recreation, wind and carbon based energy development and government services. With the abundance of large ranches in the area it retains a very western heritage.

Rawlins is an arid, cool climate. Annual precipitation at the airport is nine inches. This increases at the higher elevations of the ranch. The warmest month of the year is July with an average daily high temperature of 84°. The coldest month is January with an average high of 31° and lows of 13°. Humidity is quite low. Average yearly snowfall is 52 inches. Elevation runs from 6,400 ft. at the river to 7,700 ft. at the highest point on the property.

Created in 1868 by Dakota legislature, the county’s name was derived from extensive coal deposits found in the area. Originally covering the entire width of the Wyoming Territory, Carbon County was reduced in size by the creation of Johnson County in 1875 and Natrona County in 1888. Historically, it has been traversed by the Overland Trail, Oregon Trail, Mormon Trail, and both the original route of the Union Pacific Railroad and the Lincoln Highway. Interstate 80 is now the trail of choice for most travelers through the county, although several scenic back roads and byways offer pleasant alternatives.

The southern portion of the ranch features the North Platte River, which is the source of water for irrigation throughout the hay meadows and pastures.  The river area has cottonwood-lined banks that are good coverage for livestock and wildlife habitat.  The eastern side offers the majestic Haystack Mountains, which has a mix of broad grassy drainages, protected valleys and rocky slopes and creates a good environment for livestock grazing and desirable habitat for deer and elk. The center of the ranch is a wide valley with a higher concentration of sagebrush and arid vegetation types. The northwestern and western area of the ranch contain a high sloping ridge line which is mostly flat on top and support productive summer and fall range with good grass cover at a higher elevation.

The BLM permit allows for an estimated 4,320 AUMs of grazing on BLM land and an additional 5,000 AUMs on deeded, private lease and State lands.  BLM grazing rates for 2016 are $ l.69 per AUM for an approximate annual fee estimated at $7,300.  The private lease, which is approximately 23,527 acres, is from Anadarko Land Corp.  As a result of the checkerboard ownership, the holder of the BLM permit manages the grazing on the Anadarko lease. This lease is renewed annually but has been with North Platte River Ranch for many years. Annual lease cost for the Anadarko land is $10,629.   Wyoming State lands lease features 2,960 acres and are intermittent through the property and cost approximately $3,000 per year.  An additional 700 acres are fenced in with the property and currently, no lease is being paid for these acres.

North Platte River Ranch improvements include two labor homes, excellent calving/vet barn, horse barn, feedlot, machinery shed and other storage sheds. The buildings are efficient and low cost and provide ease-of-operation cattle facilities. The feedlot has numerous pens with about 1,400 feet of concrete bunk with good water to each pen.

Supplemental feeding requirements vary on the winter conditions and hay is typically fed from late December until the end of April.  Those requirements are typically 1 to 2 ton per head.

The ranch has approximately 700 acres of river bottom, of which approximately 300 acres are under irrigation producing yields of 500 to 600 ton.

Currently the ranch is in the final year of a five year lease with a solid ranch tenant, producing a favorable return to the Owner.

Numerous big game species can be found on North Platte River Ranch and include antelope, deer and elk.  Antelope are commonly located throughout the ranch but are concentrated on the central and western portions of the ranch due to terrain, vegetation and climate. The rugged terrain in the Haystack Mountains and the high ridgelines create an excellent habitat for mule deer.   Elk roam throughout the property, with a small resident herd.  Transitory populations can be found on North Platte River Ranch during the fall and winter.

The North Platte River runs through the property for five miles, offering water opportunities such as fishing, wading and rafting. Three and a half miles of the river frontage provides a secluded atmosphere with no public roads or public shore access and is only occasioned with some float traffic.   Numerous species of fish can be found in the North Platte River and include brown, rainbow, cutthroat trout and walleye.

Permit # 22431, Peterson No. One Ditch, diverts of 6.08 cubic feet per second (ds) for irrigation and livestock use on 425.4 acres. Irrigation water for hay meadows and pasture is primary pumped from the North Platte River.

Permit # 17808, Cairns Ditch comes from Sugar Creek and has diversion of 1.90 cfs for stock and irrigation of 88 acres.  The land for this water right has to be developed.

Livestock water is provided by electric and solar wells, numerous springs, 30 earthen tanks and the North Platte River.  Water for the headquarters and feedlot is provided by the Sinclair refinery at a very reasonable cost and is of high quality.  Currently, livestock water provides for the needs of the ranch as it is operated.

Oil, gas and coal mineral rights are believed to be reserved by prior ownership. Wind potential in the area has attracted attention from wind developers. While having been approached for development rights by a number of firms, the property remains free of any leases or options. Wind rights will be transferred to the buyer at closing.

The North Platte River Ranch offers an attractive investment opportunity for a large scale low overhead operating ranch with an excellent lease and tenant in place.  The checkerboard mix of deeded and lease lands provide control over the leased land base.  Attractive recreational opportunities and strong riparian North Platte River water rights combined with a strong financial return make this an excellent offering.  Additional opportunities exist in the area.