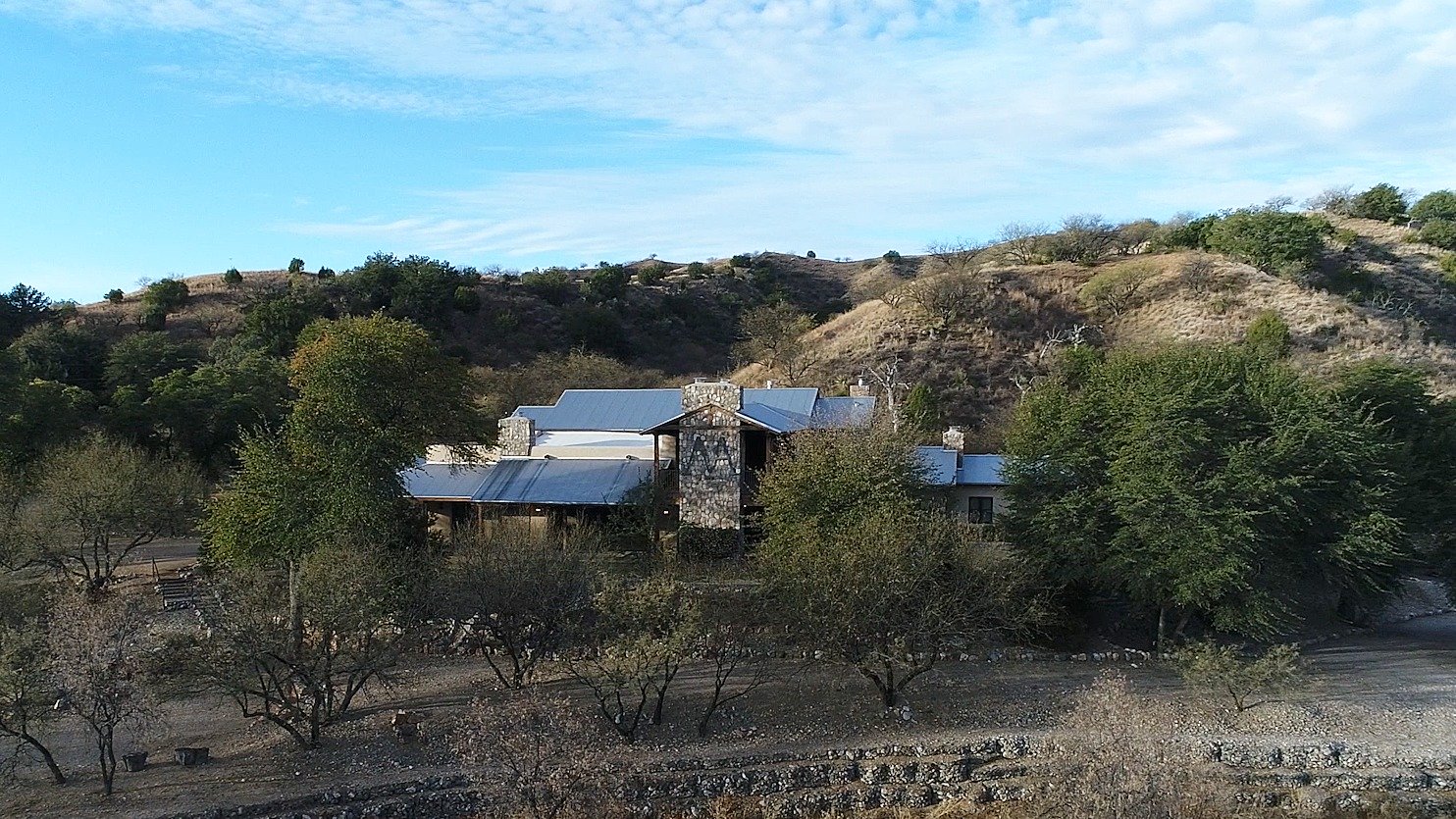 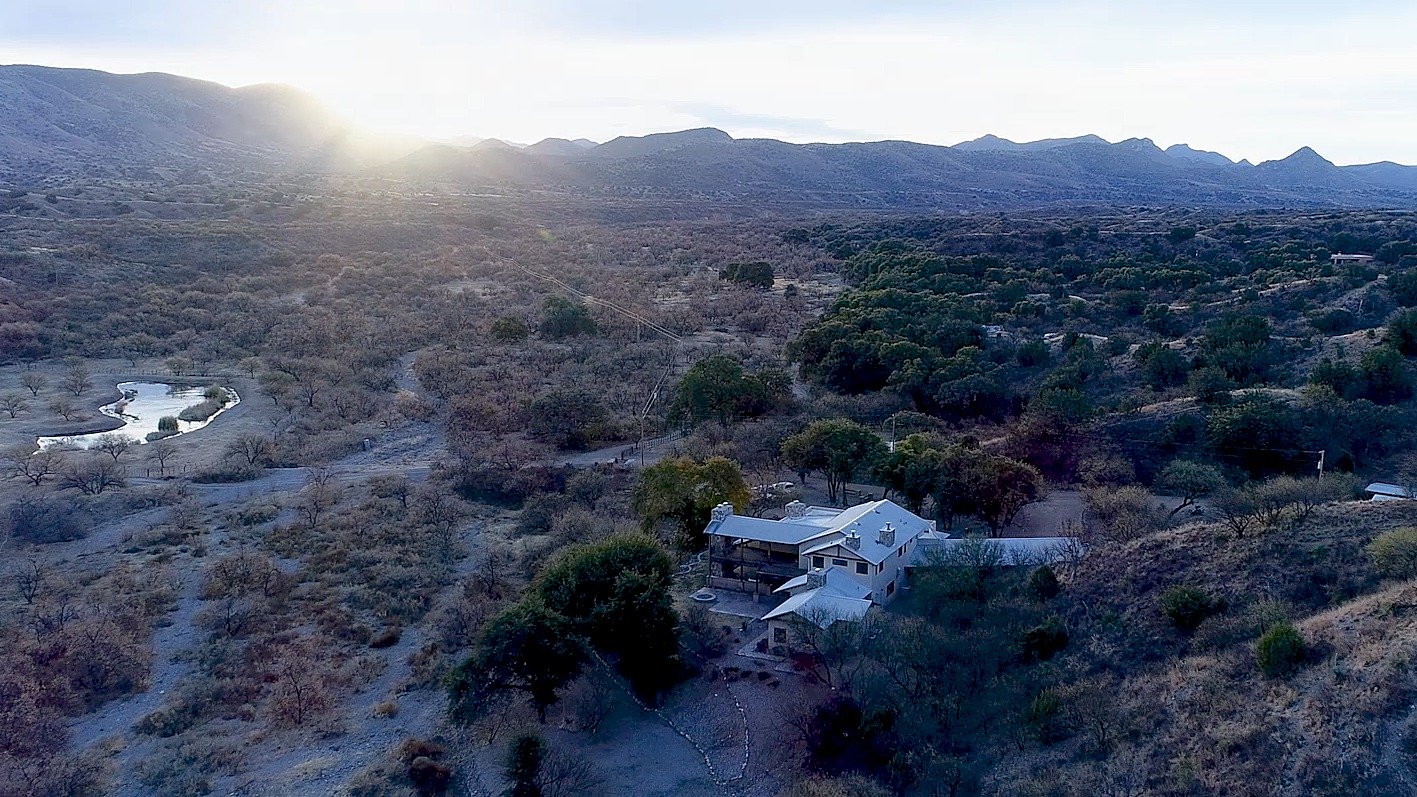 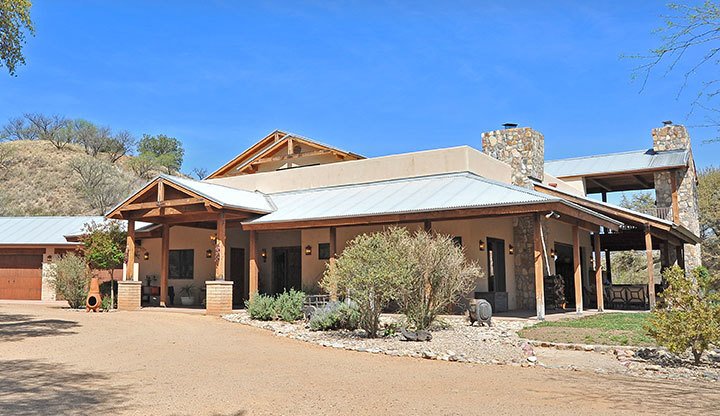 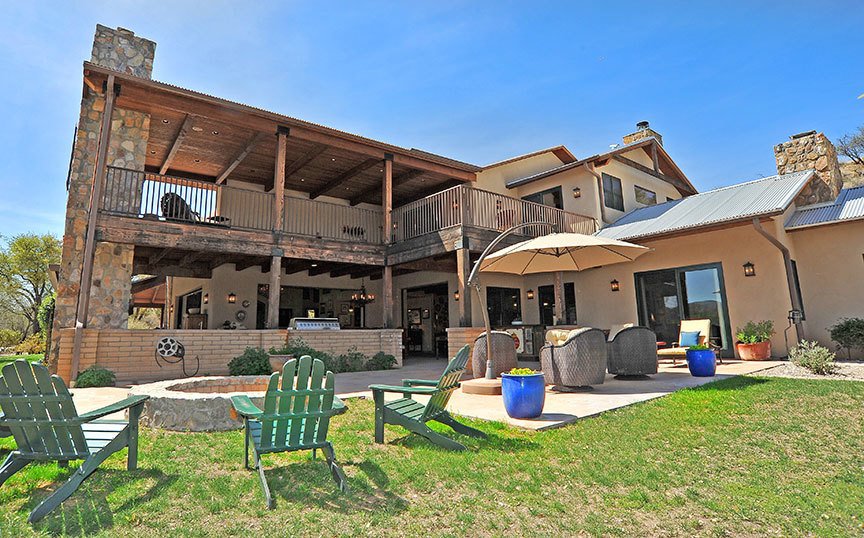 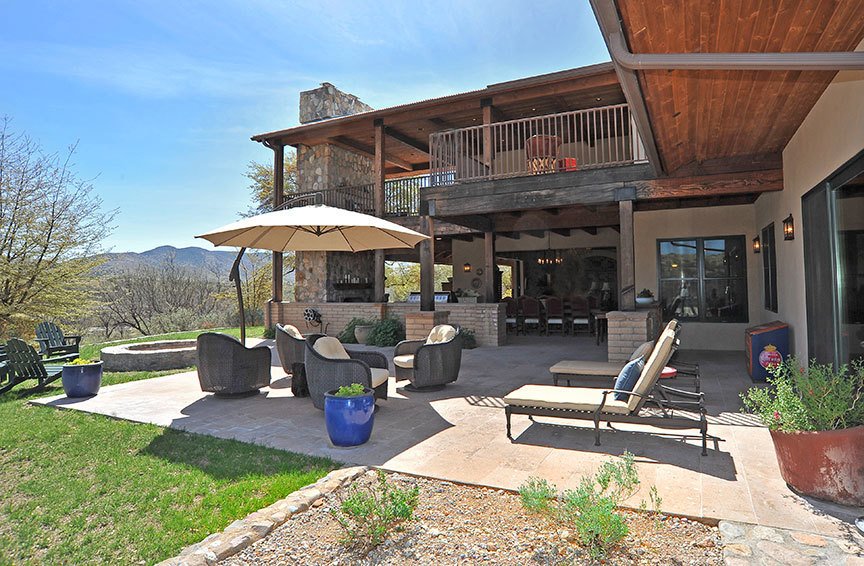 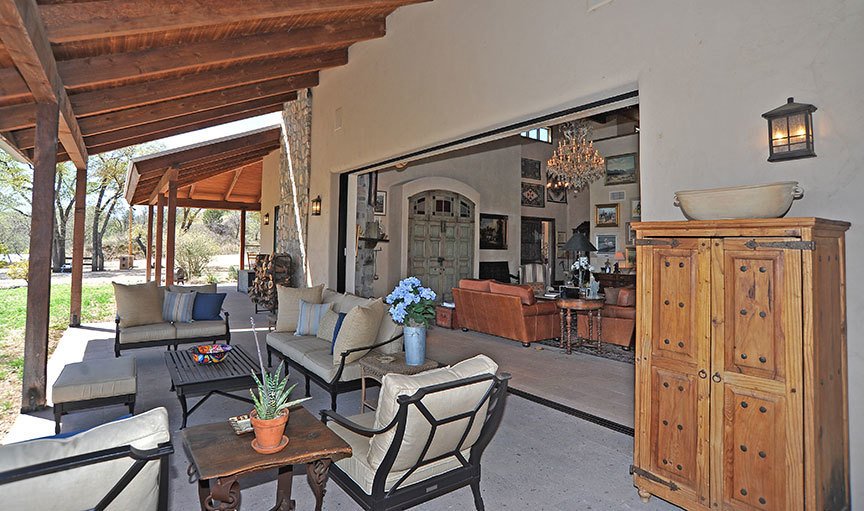 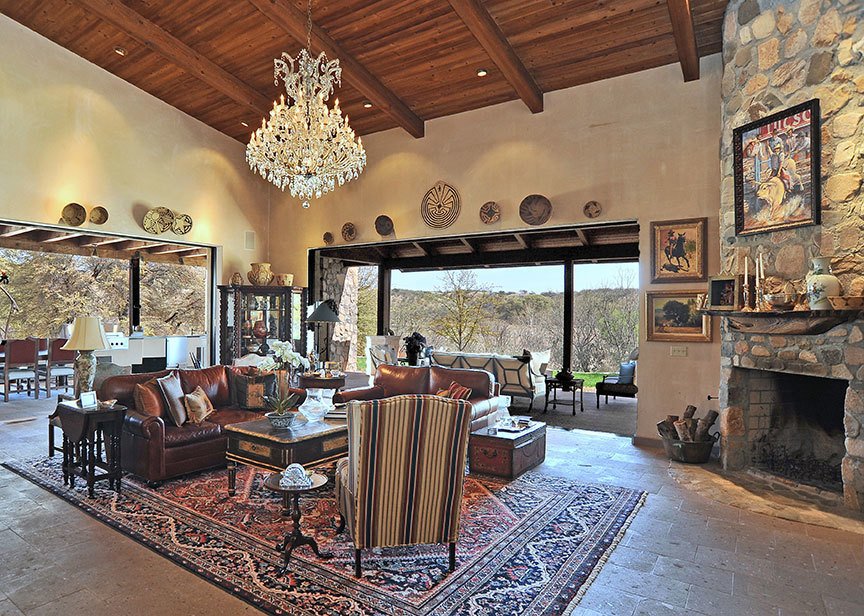 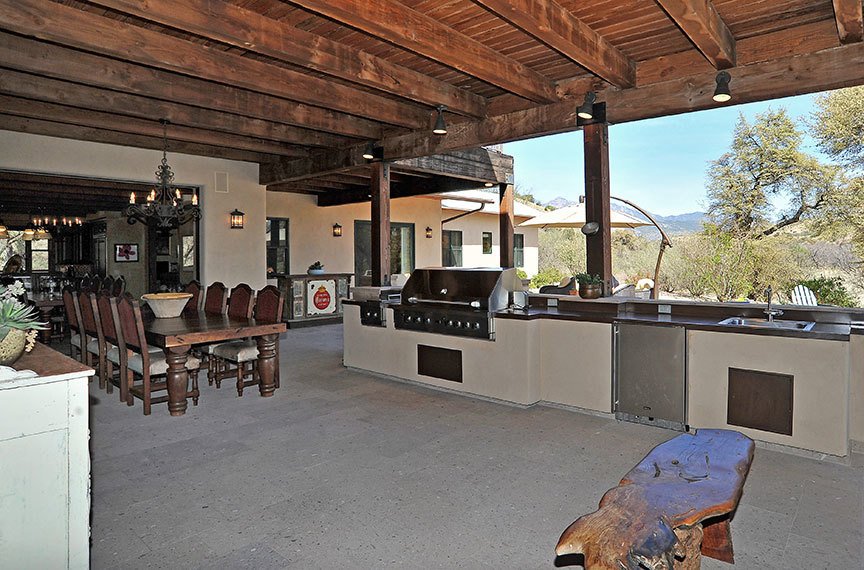 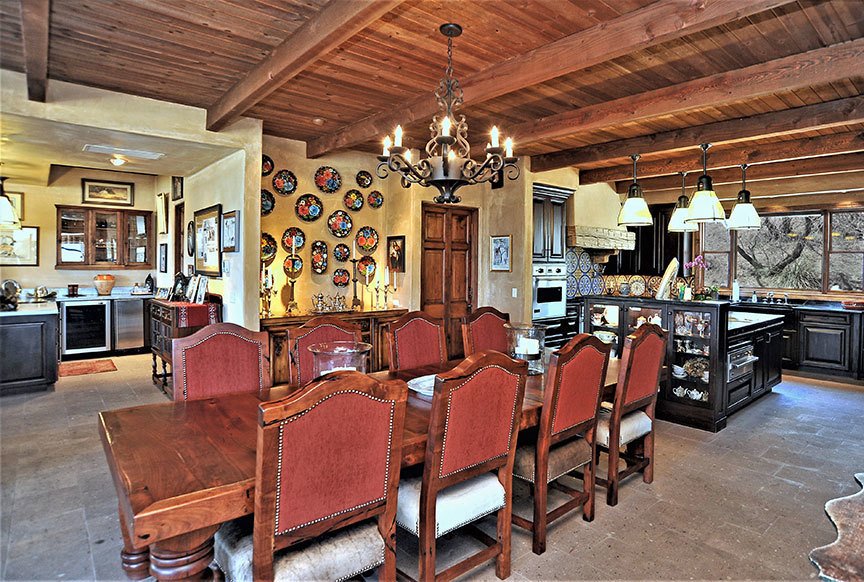 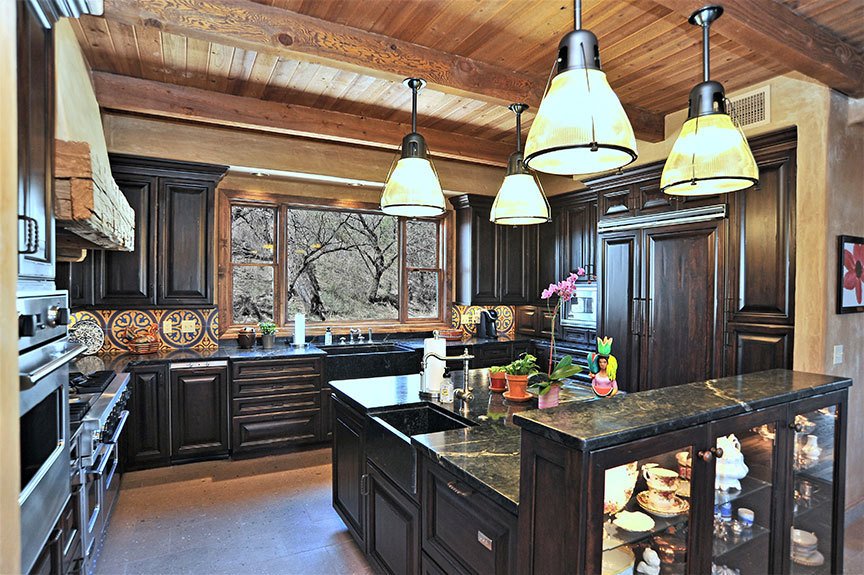 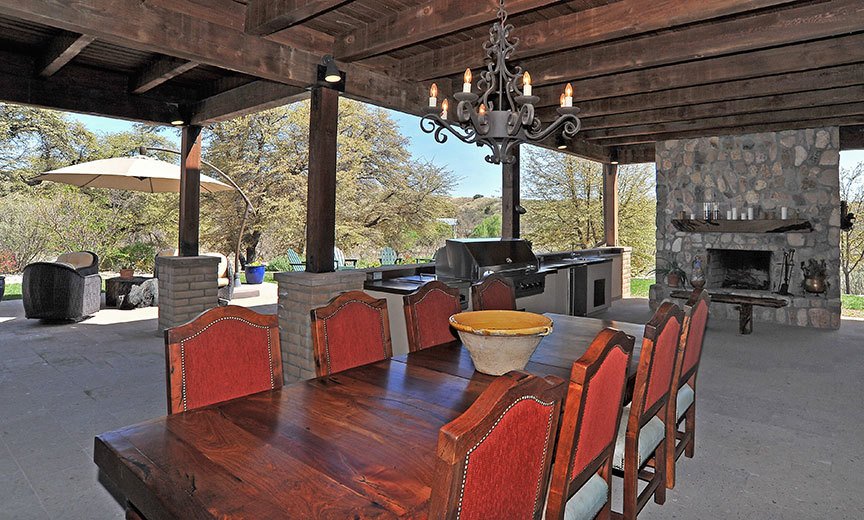 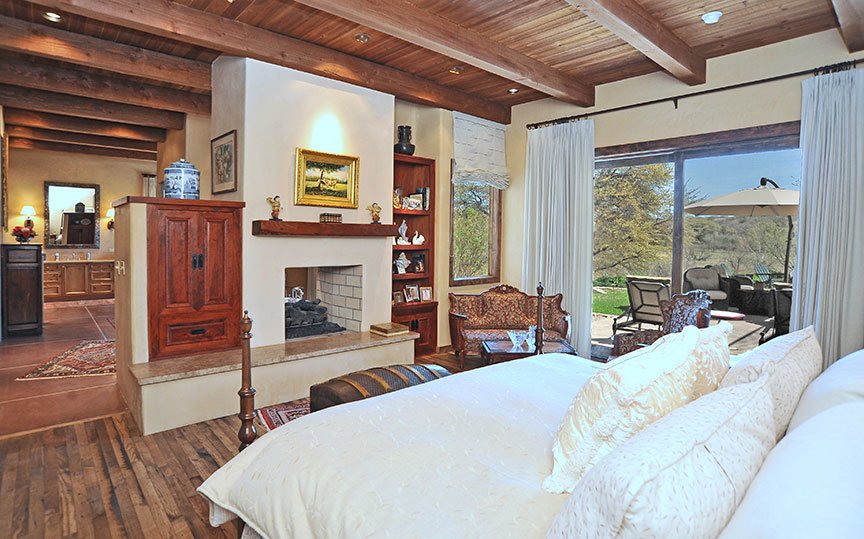 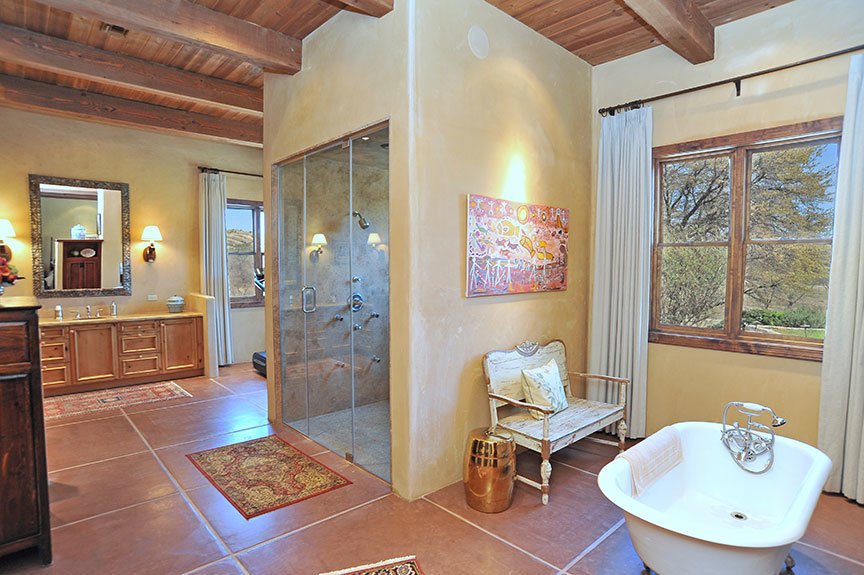 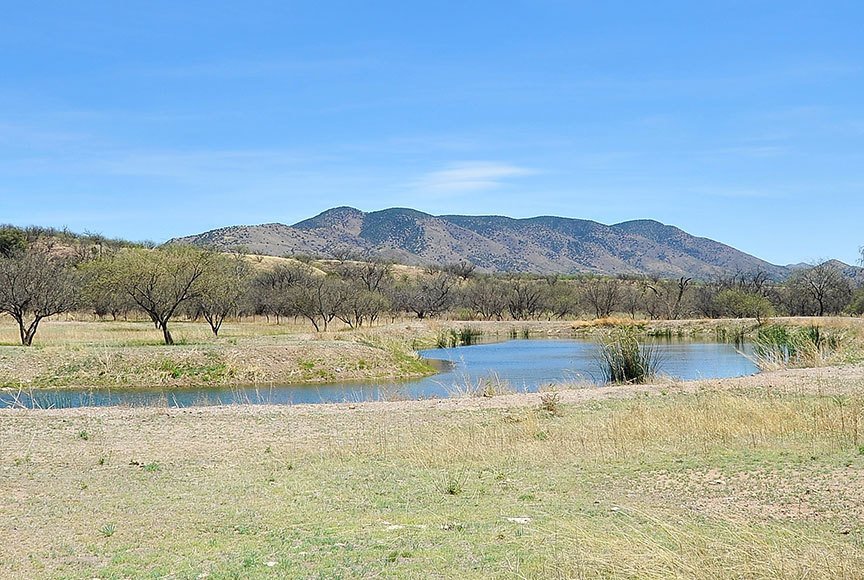 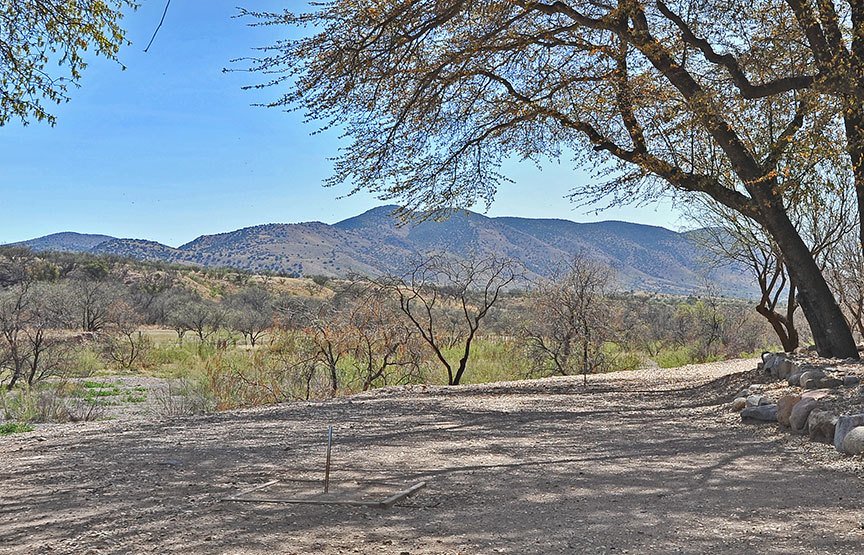 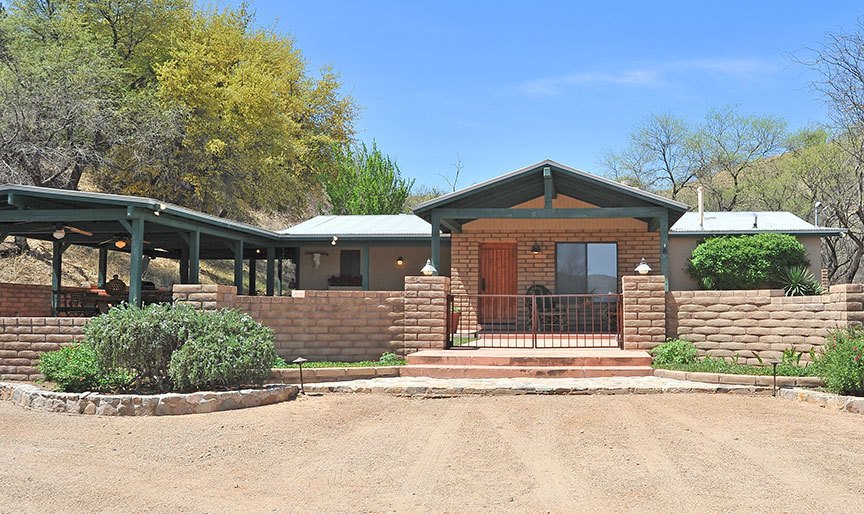 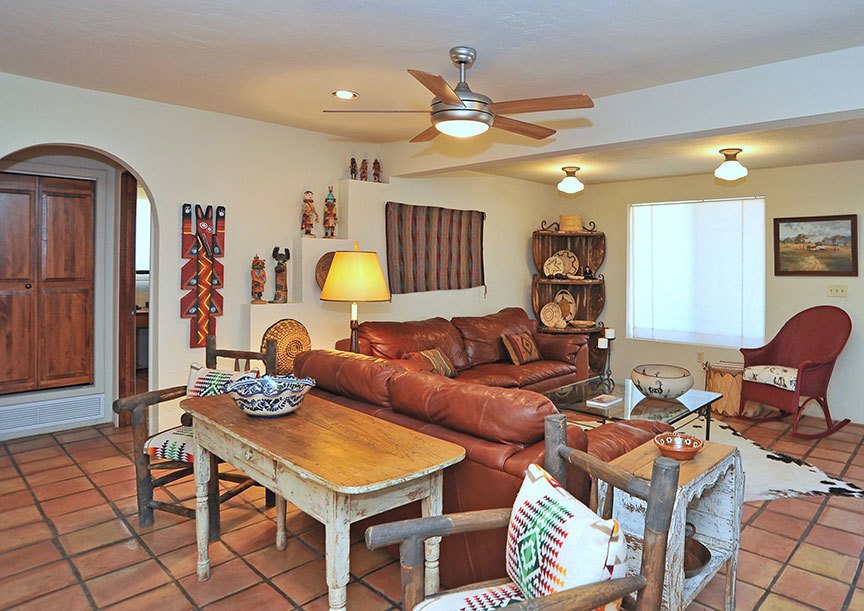 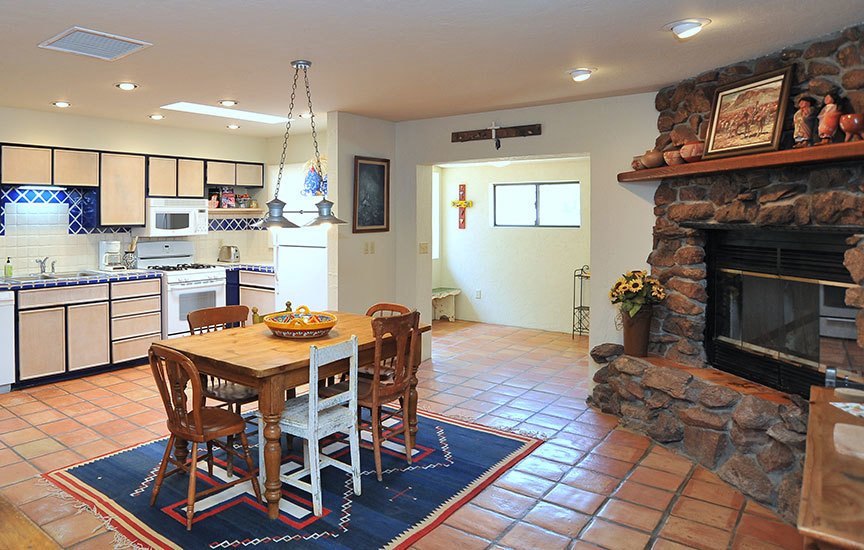 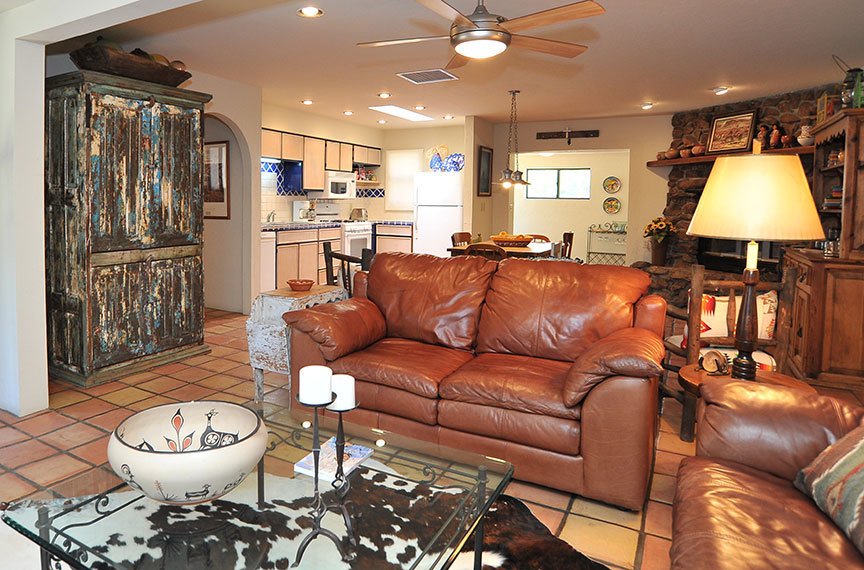 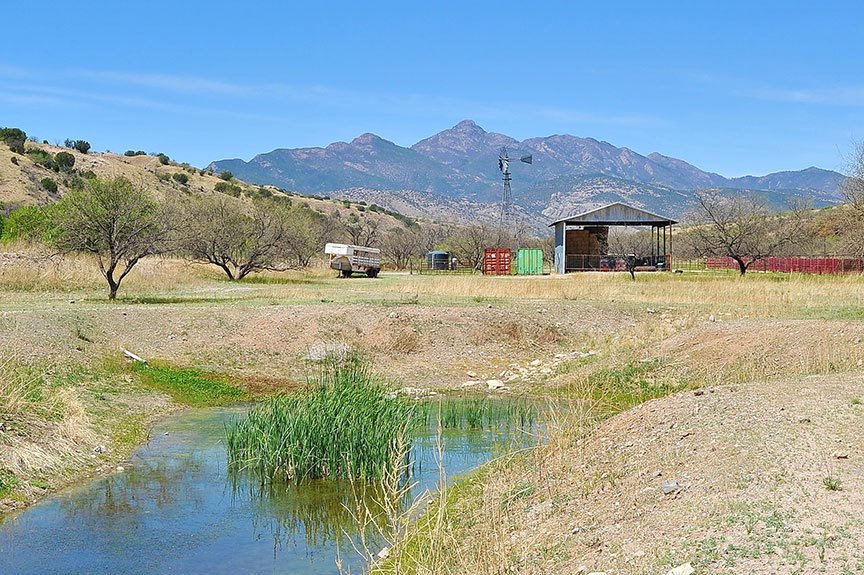 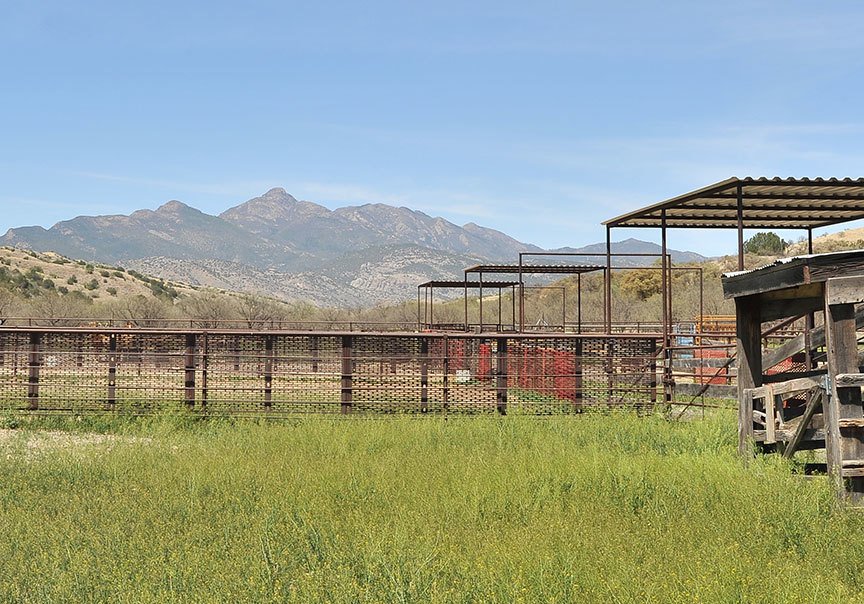 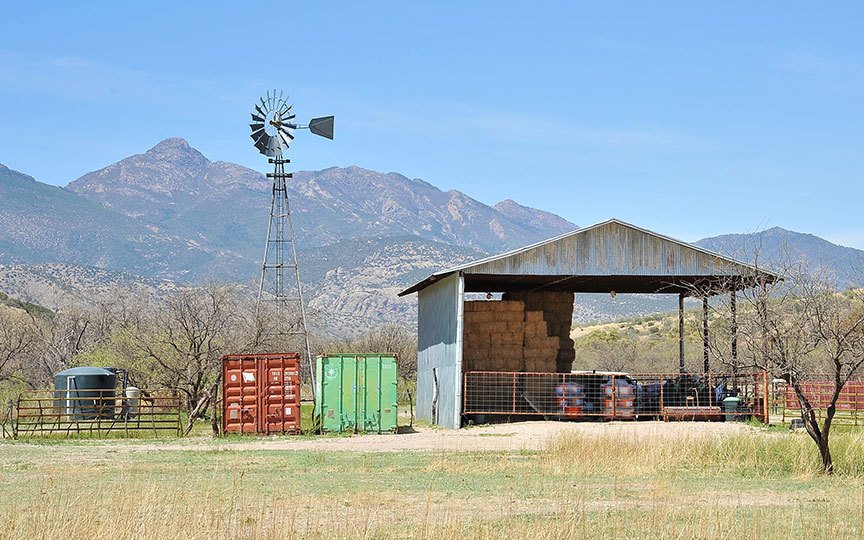 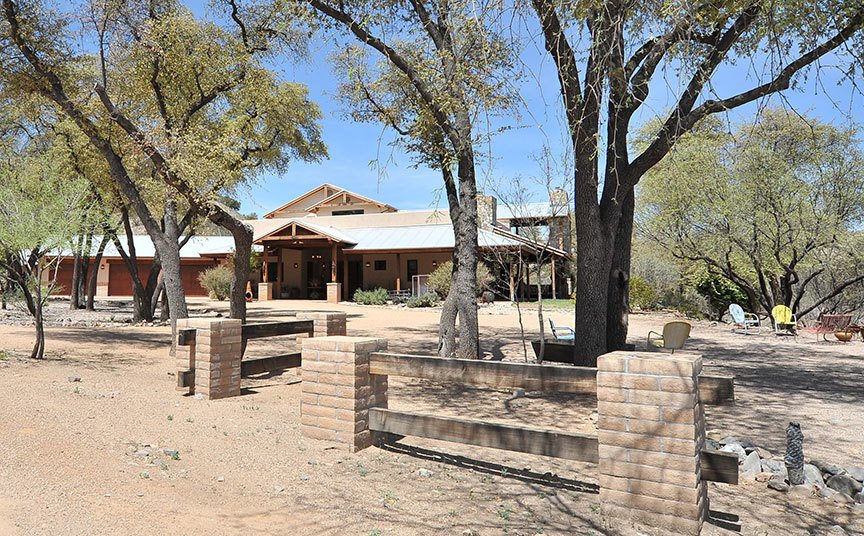 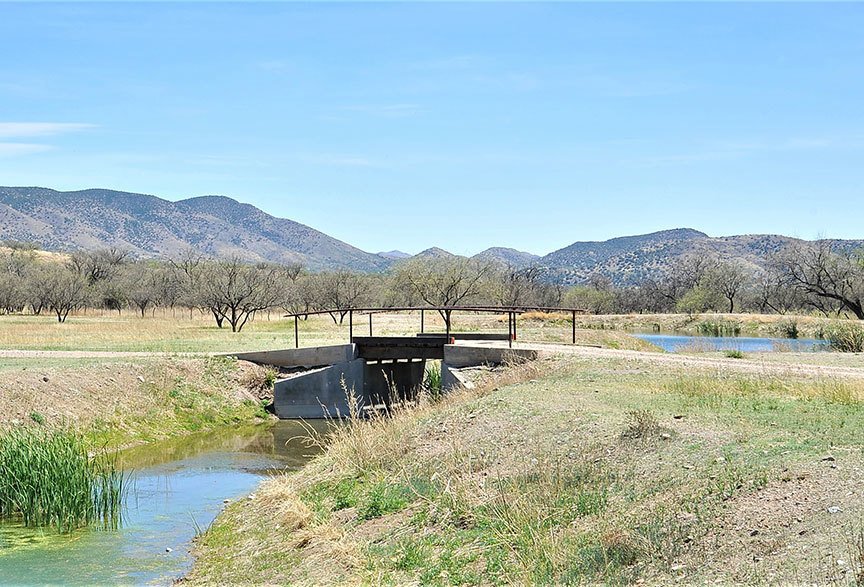 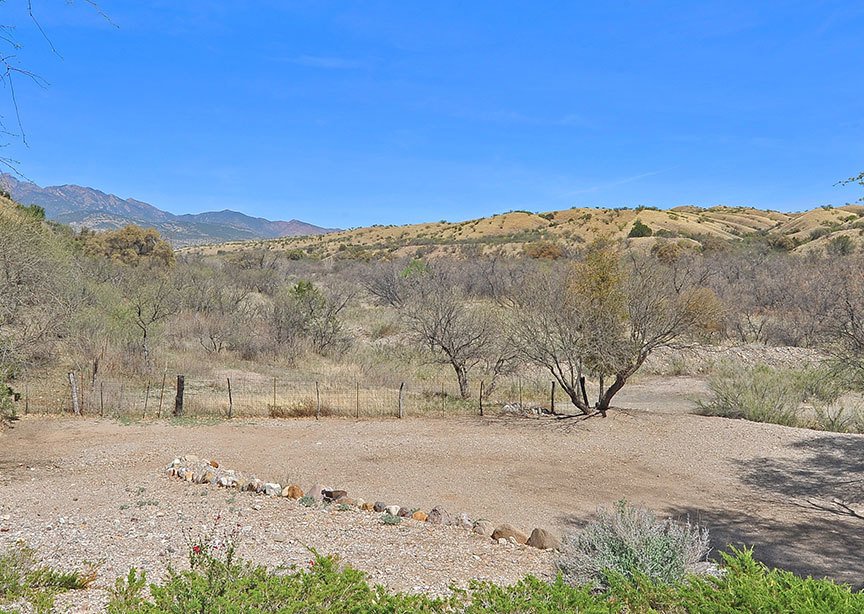 The Hacienda Amado Ranch is a premier family compound backed up with an economical cattle operation. Located in the coveted Patagonia-Sonoita area and in the foothills of the Santa Rita Mountains of southeast Arizona, the property would also be well suited for a corporate retreats or a guest ranch. The ranch is readily accessible being only a little over an hour from the Tucson International Airport. The property has a 53+/-deeded acre headquarters with an estate caliber Hacienda and three other homes. A 21,000-acre grazing permit for 350 head yearlong provides an economical cattle operation. This area has long attracted upscale retirees, bird watchers and is one of the best cattle ranching areas in the Southwest. The climate is especially appealing with moderate four-season weather boasting some of the best rainfall in Arizona.

The building compound can sleep 25 people (pillow count) and consists of the following:

Main Home
The main home is the focal point of the ranch, beautiful and well-designed, it was built in 2008 with attention to every detail. The spectacular Hacienda has 5,943 square feet livable space and over 8,000 square feet under roof. The Spanish style home fits into the location and provides a truly tranquil atmosphere. The home is complete with covered patios, upper decks, three slide-away glass walls and an outside cooking area. State-of-the-art appliances, soapstone countertops, and beautifully built cabinets in the kitchen compliment the decor. There are seven fireplaces, five that are inside and two outside. The master suite is privately located and has glass doors that exit to the outside patio. This stunning home meets the most discerning tastes.

Built in 2008, and located out of site of the other housing is the 1,360 square foot manager’s house with three bedrooms and two baths.

Additional Improvements
At the headquarters is the main corrals used in the fall of the year, a hay barn, scales and arena.

The headquarters is comprised of 53 acres +/- that borders the temporal allotment that comes with the ranch. The Forest allotment is rated for 350 animal units year-round and is 21,607 acres. With good Road access to the vast majority of the ranch and every pasture makes this allotment one of the most unique in the region. Very well-watered with springs, dirt tanks, wells and pipe lines. However, the live water and dirt tanks have been sufficient for livestock for the 20 plus years of the present owners’ time there. The Hacienda Amado is one of the most well-watered ranches in the area and the records kept by the present owner has shown consistently more rainfall than most nearby ranches.

In addition to the grazing permit the Temporal Headquarters is also leased from the US Forest Service which includes the pens for spring works, house, and well. The home is not used but for occasional overnight stays by help. The cost of the grazing fees is $2.11/AUM making the total cost at full capacity $8,862.

The Headquarters and much of the ranch is around 4500 foot elevation. The highest point of the ranch is near 8000 feet. Great bio diversity is prevalent throughout the ranch at all elevations. Some grasses, forbs, and shrubs included are blue grama, hairy grama, sprucetop grama, sideoats grama, black grama, curly mesquite, threeawns, vine mesquite, Texas timothy, mesquite, mountain mahogany, cliff rose, and manzanita. Black walnut, cottonwood, sycamore with oak and juniper being the most prevalent.

Mearns’ quail, Coues deer, bear, lion and javelina and the most sought after wildlife on the ranch. Bird watchers have long visited the area for the diversity and rare birds that are prevalent.

Hacienda Amado Ranch offers an exclusive and private amazing family compound supported by an economical cattle operation with year-round grazing and live water. Certainly a ‘one of a kind’ property unlikely to be duplicated, this trophy quality asset will always be an impressive holding.