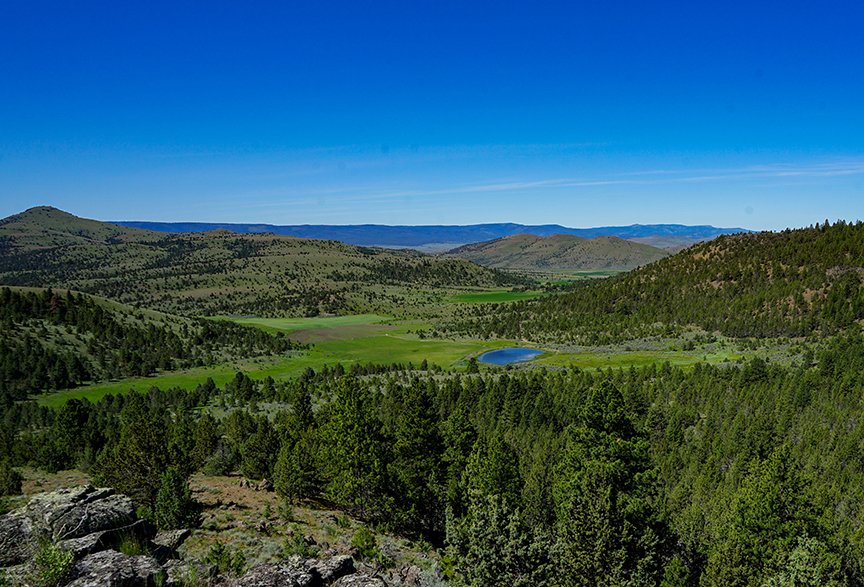 Located in the heart of the Ochoco Mountains, a little over an hour east of Prineville, Oregon, lies the North Ochoco Ranch. This extremely private ranch consists of 8,780+/- acres (8,200 acres deeded), in one large block. The ranch has a 150-year history as an operating cattle and hay with over 800 acres of irrigated or sub-irrigated farmed hay fields, as well as a large irrigation water permit with significant existing irrigation infrastructure, plus 2,000+/- acres timbered canyons. The North Ochoco Ranch is also known for exceptional wildlife opportunities especially Rocky Mountain elk, mule deer and wild bison.

The North Ochoco Ranch represents a once-in-a-lifetime opportunity to own an exceptional ranch where you can raise and hunt your own natural food, on an exclusive, secluded, well-blocked ranch with incredible history.

The ranch is located east of Prineville, Oregon approximately 60 miles, in the Norther slopes of the Ochoco Mountains, in the John Day River Basin. The ranch consists of deep rocky-walled canyons, glacially cut gorges, sagebrush steppe, juniper woodlands, mountain lakes, forests, meadows, mountain ranges, valleys and plateaus. The broad irrigated meadows support ranches with rich farmland. The Ochoco Mountains are located at the western end of the Blue Mountain ecosystem and has been regarded as one of Oregon’s premier big game hunting units. Redmond Municipal Airport (RDM) is the nearest commercial airport approximately 80 miles to the West. Condon State Airport (FAA LID: 3S9), is located approximate 50 miles to the North and can accommodate general aviation, including private business class jets.

The ranch is located in the South Fossil Hunting Unit and adjacent to the Ochoco Hunting Unit. The local office of Oregon Department of Fish and Wildlife reports that the South Fossil Hunting Unit’s Rocky Mountain elk herd is a 425% of management objective with a bull to cow ratio of 25 to 100, the highest in Oregon. Rifle and archery Rocky Mountain bull elk tags in all seasons are always undersubscribed due to the large private landowner base, historically allowing for no limit draw bull rifle tags as well as no draw required on archery bull tags (there are 8 rocky mountain elk rifle hunts, beginning in August 1 through March 31 of the following year, including two separate bull elk seasons with 4 different hunt tags).

The fish and other water resources accessible from this property are also substantial. The reservoir, located on the property, holds large rainbow trout. The ranch has permits for two additional reservoirs. The John Day River, the second longest free-flowing river in the United States, is a quick drive from the ranch and offers some of the best steelhead, smallmouth bass and trout fly fishing in the state. The region has an abundance of top fly-fishing streams including the Crooked River and Deschutes River.

There are many improvements on the ranch, which include a ranch house, barn, shop, tractor building, cattle corrals, scales, handling equipment, walk-in cooler, and ranch manager’s house, plus substantial irrigation equipment.